A reader lives a thousand lives before he dies! 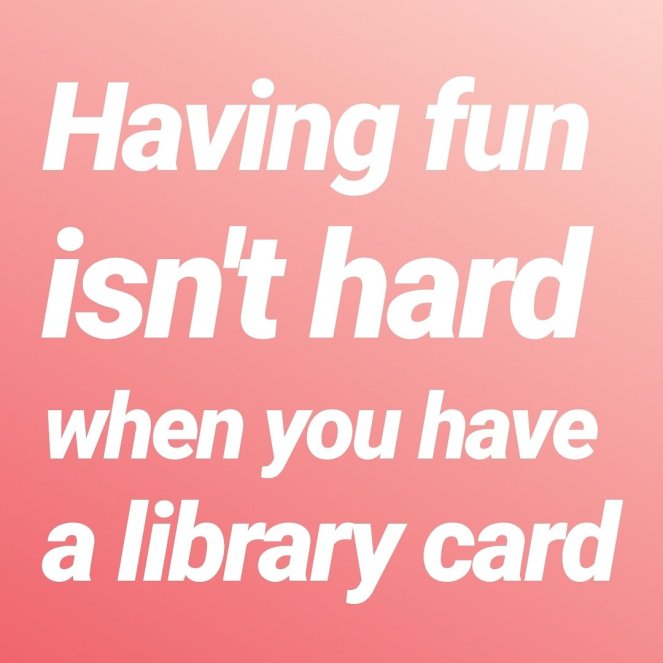 I love using my library card! It combines two of my favorite things, reading and getting things for free. 😉

For the last several years I have tried to read a book a week.  This is the first year that I’m a few books short only 46… so close! Despite not reaching my goal, I have read some really great books this year!  Here are a few of my favorites:

The Invention of Wings by Sue Monk Kidd

“The Invention of Wings is a book written by Sue Monk Kidd.
The novel itself is about a girl named Hetty (nicknamed ‘Handful’) and her troubled life as a slave in the early nineteenth century in Charleston, where Hetty is desperately wanting and waiting for a better life than the one she lives now.
Kidd’s novel begins on the eleventh birthday of Sarah Grimke. She received her gift, and as her gift, she got Hetty, a ten-year-old girl, who was intended to be her handmaid.
We follow the life of Hetty through the course of thirty-five years, as she struggled for freedom and destiny, which was very often filled with estrangement, guilt and sorrow.
Perhaps, the best thing about this novel is that the author referred to a real, historical person of Sarah Grimke, and did a fine job in combining events of Sarah’s real life and fictional events, which were written in order to make everything even more interesting.
The Invention of Wings is a very exquisitely written novel, a novel where storytelling is everything. Because in this book, we read not just about the lives of two girls (women later), but we also read about the darkness in American history, and the female struggle for freedom and liberation, which will leave no reader unmoved.”

Before We Were Yours by Lisa Wingate

“Memphis, 1939. Twelve-year-old Rill Foss and her four younger siblings live a magical life aboard their family’s Mississippi River shantyboat. But when their father must rush their mother to the hospital one stormy night, Rill is left in charge—until strangers arrive in force. Wrenched from all that is familiar and thrown into a Tennessee Children’s Home Society orphanage, the Foss children are assured that they will soon be returned to their parents—but they quickly realize the dark truth. At the mercy of the facility’s cruel director, Rill fights to keep her sisters and brother together in a world of danger and uncertainty.

Aiken, South Carolina, present day. Born into wealth and privilege, Avery Stafford seems to have it all: a successful career as a federal prosecutor, a handsome fiancé, and a lavish wedding on the horizon. But when Avery returns home to help her father weather a health crisis, a chance encounter leaves her with uncomfortable questions and compels her to take a journey through her family’s long-hidden history, on a path that will ultimately lead either to devastation or to redemption.

Based on one of America’s most notorious real-life scandals—in which Georgia Tann, director of a Memphis-based adoption organization, kidnapped and sold poor children to wealthy families all over the country—Lisa Wingate’s riveting, wrenching, and ultimately uplifting tale reminds us how, even though the paths we take can lead to many places, the heart never forgets where we belong.

All 7 of the Harry Potter Books by J K Rowling

“Harry Potter’s life is miserable. His parents are dead and he’s stuck with his heartless relatives, who force him to live in a tiny closet under the stairs. But his fortune changes when he receives a letter that tells him the truth about himself: he’s a wizard. A mysterious visitor rescues him from his relatives and takes him to his new home, Hogwarts School of Witchcraft and Wizardry.

After a lifetime of bottling up his magical powers, Harry finally feels like a normal kid. But even within the Wizarding community, he is special. He is the boy who lived: the only person to have ever survived a killing curse inflicted by the evil Lord Voldemort, who launched a brutal takeover of the Wizarding world, only to vanish after failing to kill Harry.

Though Harry’s first year at Hogwarts is the best of his life, not everything is perfect. There is a dangerous secret object hidden within the castle walls, and Harry believes it’s his responsibility to prevent it from falling into evil hands. But doing so will bring him into contact with forces more terrifying than he ever could have imagined.

Full of sympathetic characters, wildly imaginative situations and countless exciting details, the first installment in the series assembles an unforgettable magical world and sets the stage for many high-stakes adventures to come.”

Why Her?: 6 Truths We Need to Hear When Measuring Up Leaves Us Falling Behind by Nicki Koziarz

“If success is defined in the eye of the beholder,
who are you letting behold your success?

Nicki Koziarz is confronting the comparison question: Why her?

Through two striving sisters in the Bible, Nicki uncovered six truths’ we need to hear when trying to measure up leaves you falling behind.

These six truths will help you:

·      Stop staring at her success and find satisfaction in yours.

·      Find contentment with your life without being complacent in who you are becoming.

·      Gain godly wisdom to answer the Why Her silent question of your soul.

Someone will always be ahead. But that doesn’t mean you’re behind. Because Truth, like always, will set us free. And free women don’t have to measure up to anybody. Not even her.”

The Wife Between Us by Greer Hendricks

Twisted and deliciously chilling, Greer Hendricks and Sarah Pekkanen’s The Wife Between Us exposes the secret complexities of an enviable marriage – and the dangerous truths we ignore in the name of love.”

Not Our Kind by Kitty Zeldis

Though she feels out of place in the Bellamys’ rarefied and elegant Park Avenue milieu, Eleanor forms an instant bond with Margaux. Soon the idealistic young woman is filling the bright young girl’s mind with Shakespeare and Latin. Though her mother, a hat maker with a little shop on Second Avenue, disapproves, Eleanor takes pride in her work, even if she must use the name “Moss” to enter the Bellamys’ restricted doorman building each morning, and feels that Patricia’s husband, Wynn, may have a problem with her being Jewish.

Invited to keep Margaux company at the Bellamys’ country home in a small town in Connecticut, Eleanor meets Patricia’s unreliable, bohemian brother, Tom, recently returned from Europe. The spark between Eleanor and Tom is instant and intense. Flushed with new romance and increasingly attached to her young pupil, Eleanor begins to feel more comfortable with Patricia and much of the world she inhabits. As the summer wears on, the two women’s friendship grows—until one hot summer evening, a line is crossed, and both Eleanor and Patricia will have to make important decisions—choices that will reverberate through their lives.

Gripping and vividly told, Not Our Kind illuminates the lives of two women on the cusp of change—and asks how much our pasts can and should define our futures.”

The Alice Network by Kate Quinn

In an enthralling new historical novel from national bestselling author Kate Quinn, two women—a female spy recruited to the real-life Alice Network in France during World War I and an unconventional American socialite searching for her cousin in 1947—are brought together in a mesmerizing story of courage and redemption.

1947. In the chaotic aftermath of World War II, American college girl Charlie St. Clair is pregnant, unmarried, and on the verge of being thrown out of her very proper family. She’s also nursing a desperate hope that her beloved cousin Rose, who disappeared in Nazi-occupied France during the war, might still be alive. So when Charlie’s parents banish her to Europe to have her “little problem” taken care of, Charlie breaks free and heads to London, determined to find out what happened to the cousin she loves like a sister.

1915. A year into the Great War, Eve Gardiner burns to join the fight against the Germans and unexpectedly gets her chance when she’s recruited to work as a spy. Sent into enemy-occupied France, she’s trained by the mesmerizing Lili, the “Queen of Spies”, who manages a vast network of secret agents right under the enemy’s nose.

Thirty years later, haunted by the betrayal that ultimately tore apart the Alice Network, Eve spends her days drunk and secluded in her crumbling London house. Until a young American barge in uttering a name Eve hasn’t heard in decades, and launches them both on a mission to find the truth…no matter where it leads.

“Both funny and heartbreaking, this epic journey of two courageous women is an unforgettable tale of little-known wartime glory and sacrifice. Quinn knocks it out of the park with this spectacular book!”—Stephanie Dray, New York Times bestselling author of America’s First Daughter

While I got most of my books out of the library, all of these books can be found on Amazon.com or at Barnes and Nobel

**All book descriptions are copied from the overview on the seller’s website.

Hello! I am Laura Joli! Thank you for stopping by!